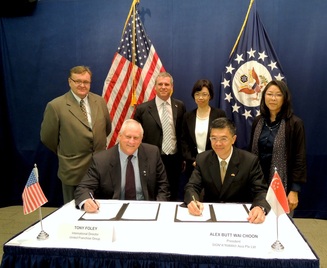 "Alex, along with his sister Clara and wife Kris, have already done an outstanding job of growing the Signarama brand in Singapore," said Ray Titus, CEO of the United Franchise Group. "We look forward to their continued support of UFG as they lead the charge for all of our brands in Southeast Asia."
This partnership marks the first step in a new growth strategy that UFG is developing for Asia. The company plans to replicate this model in other parts of the world as they continue to grow internationally.
Butt opened his flagship Signarama location in October 2010 and 18 months later was named Rookie of the Year for 2012 by UFG. In July of this year, he and his sister were also awarded the UFG Global Player Award, of which only two are given worldwide. His work with Signarama has also earned him the prestigious designation of Franchisor of the Year for 2013. He was presented with that award during the annual Franchising & Licensing Asia show, which took place earlier this month in Singapore.
About Signarama 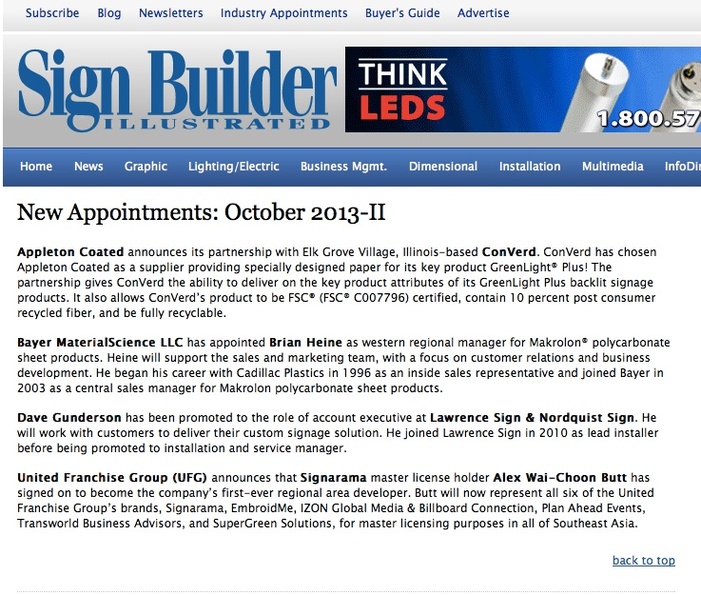 Alex Butt Wai Choon (right) left the world of Microsoft and Bill Gates to enjoy success with the Signarama franchise By Zhen M Following last week’s piece on Malaysia’s franchise industry, we take a look at how a toy pedlar switched to corn and built a franchise empire in a cup, and why two corporate bigwigs quit their jobs to also follow the franchise path. Datuk Nelson Kwok, self-professed “professional corn man” and founder of Nelson’s, started his corn-in-a-cup franchise empire by accident. In 1981, a farmer stepped into his toy shop and asked him to sell his corn as a snack there. ...
Continue Reading »
3 May 2013
Franchising is the future  (Business Circle- www.businesscircle.com.my) 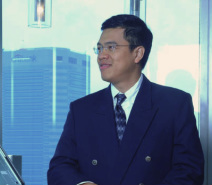 Former corporate high-flyer turned franchisor Butt Wai Choon points out that the quality of franchisors and franchisees is dependent on market forces and the Franchise Act provides the legal framework to support this relationship.

“For Malaysia to be successful as a franchise hub, the private sector, especially franchise associations, needs to step up to define the market framework and hold dialogues with the government. There needs to be a solid ecosystem.”
“Malaysians need to learn from global franchise brands entering the market before local brands could be successful. The Philippines is an interesting market to study. It has a vibrant franchise industry and a high level of franchising ecosystem – not mature in every way, but market access is more straightforward.”
Continue Reading »
@2016 Signarama. Copyright Reserved